Still a year away from the road, Volt is grabbing headlines with shocking 230 mpg claim 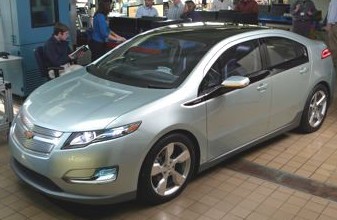 Not to be outdone by the recent news about the fully electric Nissan Leaf, General Motors announced today that its electric and gas powered Chevrolet Volt will get upwards of 230 miles per gallon in city driving.

Why just city driving? Because after running 40 miles on a charge, the Volt will dip into its small gasoline engine for some extra fuel. This will bring the gas mileage down to approximately 100 mpg on long trips. Still impressive, but not as flashy in the headlines as 230 mpg.

We’ve been waiting for the Volt to emerge from the GM plant for several years. With its sleek and futuristic styling and promise of zero reliance on gas, the Volt has been couched as somewhat of a savior for the financially troubled General Motors.

So today’s announcement is simply another in a long string of pre-production hype that GM is trumpeting in an attempt to grab the headlines back from the “Leaf” and to pump out some positive GM news for a change.

We will reserve judgment until there is an actual Volt — or Leaf — on the road and we get to test it ourselves.

Only then will we see if we get much of a charge out of the Volt.

See what our friends at Hybridcars.com have to say.