Toyota announced today the pricing for the 2012 Toyota Prius lineup and the 2012 RAV4.

While the prices for the RAV4 show a minimal increase from 2011 — and a decrease in some models — the Prius pricing shows a moderate increase across all models of the hugely popular hybrid.

With over one million units sold in the U.S. alone, the midsize Prius Liftback has helped Toyota’s Prius brand become the most popular hybrid vehicle nameplate by offering consumers the most proven hybrid technology available. 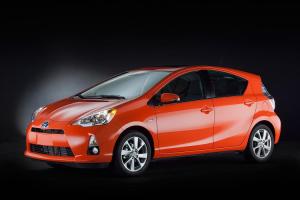 In 2012, the Prius Liftback will be joined in the showroom by other members of the Prius Family; the versatile Prius v, the Prius Plug-in Hybrid, and the subcompact Prius c.
The Prius Liftback receives updates and enhancements to its available content for the 2012 model year. The 2012 Prius Liftback MSRP ranges from $24,000 for the Prius Two model to $29,805 for Prius Five, reflecting a price increase ranging from 2.0 percent to 4.3 percent.

Meanwhile, the RAV4 compact SUV shows a slight price reduction in some models.

The Toyota RAV4 is offered in three distinct grades – RAV4 grade, Sport and top-of-the-line Limited – and with a choice between the 2.5-liter four-cylinder engine or a 269 horsepower 3.5-liter V6. Each engine can be teamed with either front-wheel drive or electronic on-demand four-wheel-drive. The roomy RAV4 offers optional third-row seating on RAV4 and Limited grade models.
The 2012 RAV4 receives an overall price increase of $100, or 0.4 percent, with some models receiving a price decrease, helping the RAV4 retain its excellent value. The base MSRP will range from $22,650 for the RAV4 four-cylinder 2WD model with a four-speed automatic transmission to $28,650 for the Limited V6 4WD model with a five-speed automatic transmission.