There’s a lot of activity in the electric vehicle market these days and Green Family Car wants to share it with the world. Here is today’s Green Car Recharge:

From the San Francisco Chronicle:

The Memphis company will deploy 34 electric trucks in the Bay Area this year and will roll out another 53 elsewhere in the country. Some are already here, at a distribution facility in Menlo Park.

The trucks, made by Navistar International Corp. and Smith Electric Vehicles, have a battery range of 100 miles – bad for rural routes but perfect for the Bay Area’s dense street grid.

Here is the press release from FedEx announcing the program.
And from the Los Angeles Times:

Tesla Motors Inc. said it will begin delivering its first mass production electric car -– the high-end Model S to customers starting June 22, about a month ahead of the expected schedule.

The Palo Alto-based company says it has more than 10,000 orders for the battery-powered car but that not all will be delivered this year.

And from Automotive News: 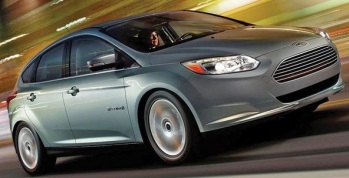 About 350 Focus Electric cars will be sent to 67 dealers in California, New Jersey and New York over the next couple weeks. Manufacturing executives signed off on the decision on Friday.

Each dealer will get about six cars, one of which will be a demonstration model, the people said.